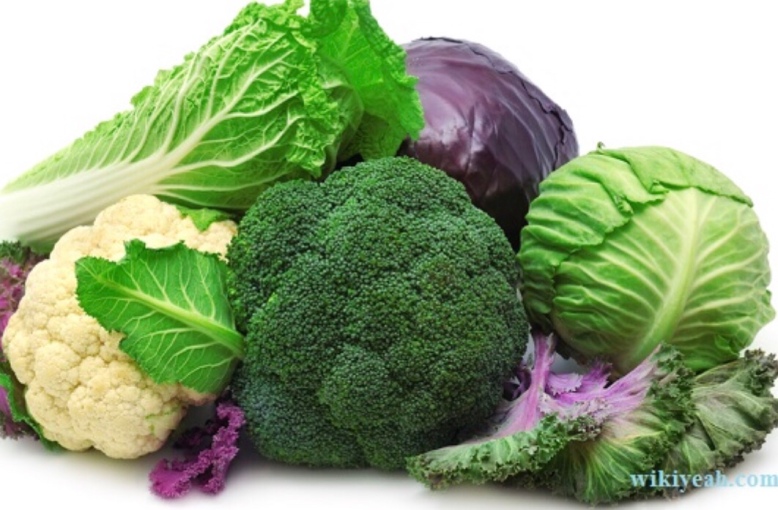 Everyone knows that eating vegetables has profound health benefits. But, like all foods, not all vegetables are created the same. Some are better than others in terms of nutritional content, and overall contribution to vibrant health. If you look more closely at their phytochemical [plant-based chemical] content, or the growing amount of research into their specific effects on the body and disease, a few vegetables appear to be downright “miracle” foods!

One such group of veggies are those of the Brassica family; commonly known as cruciferous. These include broccoli, Brussel sprouts, cabbage, cauliflower, kale, radish, rutabaga, turnip and even arugula.

What makes this group of veggies so special? Sulforaphane.

Sulforaphane is a phytochemical abundant in cruciferous vegetables, and it’s been getting a ton of attention from researchers. But it all starts with glucoraphanin.

Sulforaphane is produced when the enzyme myrosinase converts glucoraphanin, a glucosinolate (a natural compound found in some plants), through a chemical reaction induced by damage to the plant, such as cutting or chewing. As such, glucoraphanin is known as the precursor to sulforaphane.

It just so happens that cruciferous vegetables contain a remarkable amount of glucoraphanin. Which makes them powerhouses of nature. Let me tell you why.

There is a growing body of research into the wide array of applications for sulforaphane across the gamut of diseases and health issues. In fact, hundreds of studies have been carried out across the globe, since the first scientist, esteemed John Hopkins researcher Paul Talalay, realized this chemical’s potential in 1992.

In this study, Talalay and his team explored and confirmed the anticarcinogenic properties of broccoli and sulforaphane.

Since then, Talalay has dedicated many more years to researching sulforaphane, going so far as to found The Brassica Chemoprotection Laboratory ,no doubt helping inspire the continuing generations of scientists who want to know the truth about what plants and their compounds can do for the betterment of humanity.

With that in mind, here are the top ten reasons to eat your cruciferous vegetables.

Sulforaphane is increasingly referred to as an anticancer compound. This reputuation is linked mainly to sulforaphane’s potent antioxidant and antiflammatory properties, not dissimilar to turmeric (curcumin). In fact, one promising, albeit preclinical study found that the combination of sulforaphane, aspirin and curcumin was effective for the chemoprevention of pancreatic cancer.

It doesn’t stop there, however. Sulforaphane has been studied for the prevention and treatment of several types of cancer, including stomach, bladder, breast, prostate, lung, colon and skin.

Specifically, research indicates sulforaphane “possesses the capacity to intervene in multistage carcinogenesis through the modulation and/or regulation of important cellular mechanisms” and “to be selectively toxic to malignant cells.”

• In skin cancer research, the protection offered by sulforaphane “against a carcinogen in humans is catalytic and long lasting.”

• Broccoli sprouts have been found to be as a rich source of antioxidants that improve the defensive system against oxidative stress in the human colon. In fact in a 2015 study, 57.33% reduction in oxidative DNA damage in NCM460 cells due to treatment with digested BS extract was observed.

Cruciferous vegetables and sulforaphane may also have significant benefit for depression. An animal study published in 2015 found sulforaphane “has antidepressant and anxiolytic-like [anxiety reducing] activities in stressed mice model of depression, which likely occurs by inhibiting the hypothalamic.”

Inflammation has also been connected to depression, and a 2016 study found broccoli sprouts effective to “prevent or minimize the relapse by inflammation.”

This same study found that the extracts of broccoli sprouts were so effective, they acted as a prophylactic that could “prevent the onset of LPS-induced depression-like behaviors” in the juvenile and adolescent mice they were testing, all the way into adulthood. [note: LPS (lipopolysaccharide) is a bacterially derived inflammatory factor known to cause a wide range of health issues]. More research is being done on the phytochemicals of cruciferous vegetables and depression.

This is some evidence that sulforaphane may have significant value in pain, or pain management. A 2000 study on female fibromyalgia patients reported that the combination of ascorbigen (derived from Vitamin C) and broccoli powder “reduces pain sensitivity and improves quality of life” for patients suffering from this challenging condition.

Cardiovascular problems remain a top health concern, especially in the United States. CVD, cardiovascular disease, is on the rise, with Ischemia-Reperfusion (I/R) injury (such as myocardial infarction (“heart attack”), stroke, and peripheral vascular disease) and hypertension being main components.

Research is showing that sulforaphane helps with inflammation of the arterial walls, inhibits obesity, relieves hypertension, and other conditions that are part of or lead to CVD.

With regard to hypertension, a 2012 study reported sulforaphane “decreases renal and vascular oxidative stress and inflammation as well as blood pressure”, thus assisting in hypertension. Similarly, but even more significantly, a 2006 study demonstrated the power of eating foods high in sulforaphane by observing significantly “lower blood pressure and less tissue inflammation in adulthood, regardless of their subsequent diet” in the offspring of pregnant rats fed foods rich in the compound.

Also of special note, a 2009 study in Iran in which rats were given an extract containing 2% of broccoli sprouts for ten days. “The results show that a relatively short dietary treatment with broccoli sprouts can strongly protect the heart against oxidative stress and cell death caused by ischemia-reperfusion. Which is promising, indeed!

Sulforaphane may also protect arteries from disease by boosting a natural defense mechanism in the body.

It’s well known that cruciferous vegetables, especially broccoli, are a superior source of antioxidants. There are almost 300 studies on PubMed alone, referring to these vegetables and antioxidants.

One particularly interesting study was carried out on young male smokers, in which 250g/day of broccoli was consumed, for a ten-day period. At the end of the treatment, of the many observations, decreases circulating CRP (C-reactive protein) concentrations were noted. This is significant because the measure of CRP indicates the level of inflammation in a body, and indirectly the oxidative stress status, with high levels of both being associated with long-term diseases.

In 2015 broccoli sprout extract was again found highly effective in reducing of oxidative stress, in this case being observed to assist with healthy liver function.

6. Protection From and Elimination of Toxins

There are so many toxic substances present in our lives. Too many! Cruciferous veggies and their sulforaphane rich tissues can help, as noted in several studies.

In 2014, a randomized clinical trial recruited 291 participants from a rural area of China, an area known for high levels of air-pollution. The non-placebo group consumed a broccoli sprout-derived beverage providing daily doses of 600µmol glucoraphanin and 40 µmol sulforaphane over a 12-week period. [So essentially they were given a concentrated extract of cruciferous vegetables for three months.] Urine testing found “rapid and sustained, statistically significant” increases elimination of toxic substances in those drinking the beverage, over the placebo group.

Studies have also shown sulforaphane assists in protection from and elimination of arsenic and pesticides. The detoxifying qualities of cruciferous vegetables is thought to be directly connected to sulforaphane’s role in activation of Nrf2, which is known to have a critical role in the metabolism and excretion of toxic substances.

It’s generally recognized that diet and exercise can profoundly assist with the prevention and treatment of Type II Diabetes. However, specific positive results have been seen with regard to sulforaphane and consuming cruciferous vegetables.

In particular, IR is an aspect of Type II that can cause havoc in a body. A 2016 study investigated the effects of broccoli sprout powder, containing high concentration of sulforaphane, on IR in Type II diabetic patients. In a randomized trial, 81 patients received either the high concentration of sulforaphane powder or a placebo, over four weeks. The end results gave clear indications of lowered levels of insulin resistance.

Other studies have demonstrated similar results, showing decreased oxidative stress and IR and that “Sulforaphane could prevent nephropathy, diabetes-induced fibrosis, and vascular complications,” further empowering those with Type II Diabetes.

The bacteria Helicobacter pylori is most famously associated with stomach ulcers, and, in many cases, gastric cancer. Our sulforaphane-laden crucifer friends happen to offer distinct support in eliminating the colonisation of this organism in our bodies. ] This is most clearly demonstrated in a 2009 study citing:

“Forty-eight H. pylori-infected patients were randomly assigned to feeding of broccoli sprouts (70 g/d; containing 420 micromol of SF precursor) for 8 weeks or to consumption of an equal weight of alfalfa sprouts (not containing SF) as placebo. Intervention with broccoli sprouts, but not with placebo, decreased the levels of urease measured by the urea breath test and H. pylori stool antigen (both biomarkers of H. pylori colonization) and serum pepsinogens I and II (biomarkers of gastric inflammation).”

While the sulforaphane had measurable, positive results during the testing, levels reverted to their original amounts at the end of the two months following cessation. This indicates that continued consumption of the broccoli sprouts would have continued benefits.

Other research with sulforaphane rich sprouts reported 78% of patients showing negative stool antigen results after therapy, with 67% remaining negative another 35 days after stopping. Research with human gastric xenografts on mice reported the  Helicobacter pylori “completely eradicated” in 73% of the sulforaphane-treated grafts.

Studies suggest that sulforaphane might be a promising therapeutic agent for cognitive enhancement in Alzheimer’s disease.

In 2015, researchers looked at the effects of sulforaphane compounds via the administration of broccoli sprout juices of varying concentrations. They reported positive effects against the measures of two major factors implicated in the pathogenesis of AD, as well as upregulation in the intracellular glutathione content and the activity of antioxidant enzymes — both of which may contribute to improved tissue detoxification and function.

Dysfunctional inflammation has increasingly become identified to be a driving factor at the root of most, if not all, chronic illness and disease. In some form or another, somewhere, a body that is unwell, is inflamed. Luckily, nature has provided us with several remedies for this scourge of our times.

As anti-inflammatories go, sulforaphane is right up there with that king of all spices, curcumin (turmeric) giving our cruciferous vegetables the upper hand in the list of healing foods. “The consumption of broccoli sprouts modulated the excretion of biomarkers linked to inflammation and vascular reactions,” according to a 2015 study.

A more recent cell-based study, published in 2016 reported, “clear evidence that pre-treatment with sulforaphane completely restored the antioxidant status and prevented inflammatory responses.” They went on to say, “the protection offered by sulforaphane against acrolein-induced damage in PBMC is attributed to its antioxidant and anti-inflammatory potential.”

More and more data suggests that sulforaphane may be useful as a therapeutic agent for the treatment of inflammatory conditions and diseases.

This is not, by far, an exhaustive list of the known benefits of eating your cruciferous vegetables. Studies are even showing sulforaphane has benefits for autism, which reportedly affects around 2% of Americans (mostly males) and costs the US around $100 billion, annually.

A study at the ChemoProtection Center, home of the “Father” of sulforaphane, Paul Talalay, explains,

“The rationale for a clinical trial of sulforaphane in autism was based on evidence that autism is characterized by oxidative stress, depressed antioxidant capacity, and mitochondrial dysfunction. These pathological processes are antagonized by sulforaphane.”

Seems they were right because in the resulting randomized, double-blind, placebo-controlled trial where they examined the effects of sulforaphane-rich broccoli sprout extract on autistic patients, they saw ‘dramatic’ improvement in 65% of those receiving it. These improvements diminished in the four weeks following the dosing period, solidifying the observed benefits of continued consumption.

This just goes to show, the tremendous benefits of eating your sulforaphane-rich cruciferous vegetables should not be underestimated. Instead, take advantage of this bounty from nature by making them a regular part of your diet.

Many thanks for to the foodrevolution.org for sharing this article.

Nature has a way of looking after us providing us with all the key minerals and nutrients eating more natural unprocessed food is fundamental to our health.